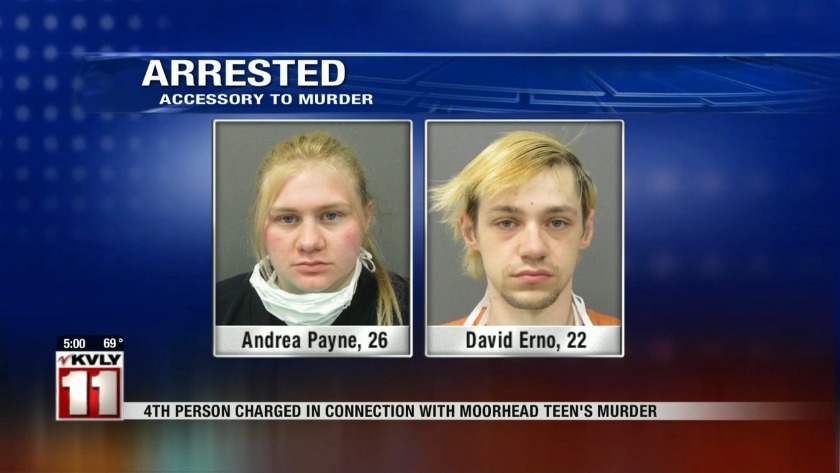 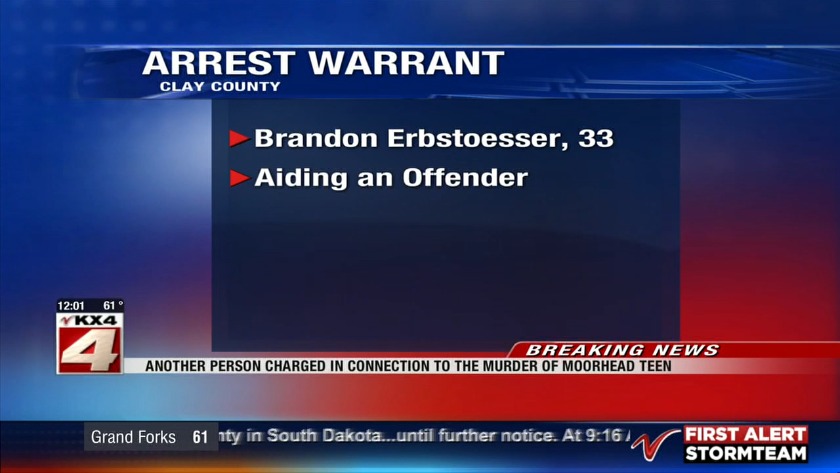 MOORHEAD, M.N. (KVLY) A fourth person has now been charged in Clay County Court in the murder of 19-year-old Dystynee Avery.

33-year-old Brandon Erbstoesser is charged with one felony count of aiding an offender in murder.

27-year-old Ethan Broad is already in jail and charged with the murder of Avery, after court documents say he told police he killed, dismembered and threw Avery's body in the trash.

Court documents say in an interview with police, Erbstoesser said he had a phone call with Ethan Broad on the morning after Avery's murder.
Erbstoesser stated Broad was distraught and asked Erbstoesser what he should do.

Erbstoesser told officers he advised Broad to report Avery as missing, tell her family she ran away, hide or destroy her property, and refrain from any electronic communication about the incident.

Documents also state Erbstoesser admitted to doing a walk-through of Broad's apartment to make sure any of Avery's belongings were not visible, as well as any blood had been cleaned.

Dystynee's family tells Valley News Live they don't know Erbstoesser and don't think he was a friend of Dystynee.

Court documents filed last week say Andrea Payne admitted she had been in the apartment when Avery was killed. Payne says she came home from work, as she was also living with Broad at the time, and said Broad and Avery were in the back bedroom. Payne says Broad later came out and said that Avery might claim he raped her.

Payne later heard Broad and Avery fighting, but said she did not get up from the couch to see what was going on. Payne says she then heard loud thumps or strikes, and Broad soon came out and told her he hit Avery over the head with a lead pipe and had 'cracked her skull open.'

Payne said she did not do anything to check on the victim, and soon left. When she returned several hours later, David Erno was with her. Payne says she noticed blood on Broad's face, and says while she was making a sandwich Broad admitted to killing Avery.

Payne did not report Avery's death, and continued to live in the apartment with Broad. Court documents say Payne also lied and gave misleading information to police when asked about Avery's whereabouts.

In Erno's interview with police, court documents say he told police Broad had also admitted to him that he had killed Avery and that he had put Avery's body in a tote in his garage.

Documents say Broad and Payne told Erno to get the victim's computer and destroy it. Erno stated he wiped the computer of any trace of the victim. Documents say a google search on Erno's phone backs up his statement, showing a search for 'how to wipe a computer clean.'

If convicted, Erbstoesser, Payne and Erno could spend up to 20 years in prison. A mugshot of Erbstoesser is not yet available, as he has not been arrested yet. A warrant is out for his arrest.